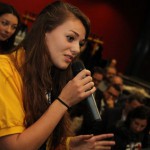 youth participant, I was invited to attend the European Youth Panel (YEP) and Safer Internet Forum (SIF) this year. The time I spent there was lovely.

‘I’ve had the fortunate opportunity to go to SIF twice: I was at SIF 2014 in Brussels and, this year, SIF was held in beautiful Luxembourg. It felt the same, but also totally different. We were with a group of 17 adolescents between the ages of 12 and 19. We brainstormed about the internet and spent time actively breaking, making, programming and playing with the tools that the Makerspace offered us. A Makerspace is a community-operated workspace where people with common interests, often in computers, machining, technology, science, digital art or electronic art, can meet, socialise and collaborate. The nice thing about the Makerspace is that we were challenged to be creative and look at the possibilities and not the risks. In a group of creative brilliant minds, you get inspired to think further then you would believe is possible.

‘The ideas and solutions that we came up with were presented at the Safer Internet Forum. We were put in bright yellow shirts so that we would attract the attention of all of the SIF attendees. In my opinion, it’s very important for an event like this to have youth there to represent the users of the internet and to brag about how technically developed youth actually are. We got to join in on the sessions and panels, and it turns out that the youth have a lot of questions and are intrigued to listen to what the ‘big guys’ have to say. I had interesting conversations, learned a lot, and got inspired. People tend to forget that one third of internet users are actually kids. So please invite us in on the conversation that you’re already having about how we use the internet, and how we should use it in a safe way.

‘We ended this lovely adventure by signing each other’s yellow shirts with messages, a tour around Luxembourg and saying goodbye to the youth group who’ve really become good friends of mine in such a short time. Sign me up for next year!’