On 20 September 2012, the French national centre for pedagogic documentation (CNDP) organised a conference on social media in learning and education for summer university students at the Poitiers Cité des Savoirs.

END_OF_DOCUMENT_TOKEN_TO_BE_REPLACED

On 20-21 September 2012, the Polish and German Safer Internet Centres held their annual conference in Warsaw. Among the many highlights of the event, Insafe coordinator Janice Richardson talked about the key drivers and challenges for the 30-country wide Insafe network in 2012, in particular underling the importance of peer support and interaction between youth. She briefly showcased the Pan EU Youth website, supported by the European Commission and Vivendi, where young people are encouraged to meet and teachers can download games to trigger discussion and debate about media-related issues in class.

END_OF_DOCUMENT_TOKEN_TO_BE_REPLACED

Privacy and data protection are very hot topics in our current society. Even when we maintain the most private and secured privacy settings on our accounts, it still feels like people are losing power over the information they put online.

Moreover, whatever we do online, someone may be tracing our steps and using this information for their own benefit. Is anything still private in this world without secrets? Should we hold on to our quest for privacy, or is this an unavoidable evolution?

END_OF_DOCUMENT_TOKEN_TO_BE_REPLACED

The eTwinning Camp unites teachers and pupils from the winning projects of the eTwinning prizes, which in 2012 were awarded in Berlin at the eTwinning Annual Conference. This year the camp took place at the end of April close to Antalya in Turkey. There was a full programme of workshops, leisure activities and excursions including workshops creating short movies using iPads and PlayDecide games.

PlayDecide is a discussion game which enables participants to debate controversial issues in a simple and effective way. PanEuYouth, a website for young people to express themselves, has developed PlayDecide games on three topics:

The games encourage young people to come up with policies on different issues on online responsibility and digital literacy.

The PlayDecide workhop took place several times over three consecutive days and was led by Annick Van de Velde, of the Insafe Coordination Team. The participants were given a number of typical situations that they might find themselves in, in this socially networked world. Through interaction and group discussion, they then had to ‘decide’ on what actions they would take and why. On the final day the game was played with teachers to see how digital lives and eSkills could fit into a school’s curriculum. 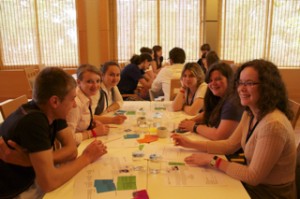 All the situations may be found here.