In 2013, the Web We Want: a handbook for teenagers, developed by and for young people, was launched. The handbook provides exercises and tips on a range of different online issues such as online rights and responsibilities, online identity, privacy, and so on.

Having in mind the need to teach online issues at the classroom, the Web We Want handbook for Educators, designed by and for teachers, was launched today, 18 March 2015 at the Google offices in Brussels.

Our Youth Ambassadors, Grace and Kathrin, were present at the launch event. Grace was part of the panel called ‘Skilling European citizens for the future’ where the Youth Manifesto initiative served as an example of youth-led initiative that engages young people to voice their views on the future of the internet and encourages them to promote active citizenship and participation skills. The digital version of the Youth Manifesto publication, which outlines the ten key principles that European youth have identified as essential to creating a better internet for the future, is now available at www.youthmanifesto.eu. 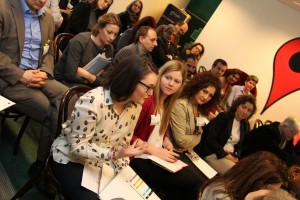