Murat (17) is a member of the Austrian Youth Panel and he took part at the 3rd Pan-EU Youth Panel and Safer Internet Forum in October 2011 in Luxembourg. After the event we asked Murat to share his impressions with us:

“The four days in Luxembourg were just great! I got to practice my English a little bit, but the best thing was that I met many nice young people of my age from different countries! During those four days we exchanged a lot of ideas about safe use of the internet and mobile phones; I also heard the opinions of parents, politicians and internet pros. Some ideas were really interesting but there were also some that I did not like at all! For example I noticed that some parents thought that the best thing they could do about their kid´s online safety was to spy on them! In my opinion, youngsters are not robots and therefore you should not be trying to solve the problem by installing spying software on their mobile phones! Instead of that parents would be better off taking the time to discuss online safety with their children.

We, the youngsters, were interested in topics like the illegal downloading of songs and videos from the internet, and we also focused in our discussions on sexting. What was particularly interesting for me was the power of your own voice on the internet and how you can make a difference. Think about the revolutions in the Middle East – it all began when an Egyptian woman was arrested because she spoke her mind about politics on the internet. I had several opportunities to share my ideas with the forum and speak from the speaker´s desk – I felt like a real politician then !

Last but not least, I would like to send my regards to all the buddies I met on the forum!” 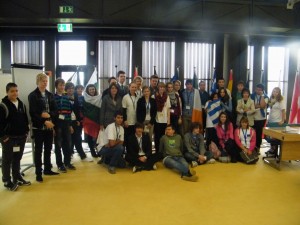